Towards the end of January I posted a blog on a new hobby I was embarking on i.e. model car building

Tonight, on the 27th of February 2011, I present my Godzilla. It took me just over a month to complete and it was an immensely satisfying experience. For once, I don't have to write a lot because I believe that the pictures tell the story better. 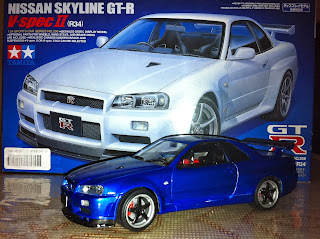 I was going to go with Pearl White but like red is to a Ferrari (the actual colour is Rosso Corsa or Racing Red), Mica Blue is the obvious colour choice for this car 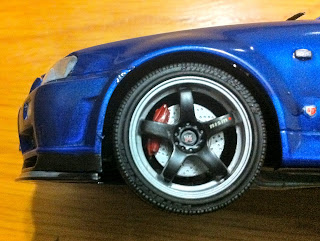 The GT-R badge in the middle of the rim was one of the most difficult tasks of the entire project. The colour of the rim (anthracite with a chrome lip) was the first thing I took creative liberty with. It is also the part of the car that I am most proud of. For perspective, the entire wheel (inclusive of tyre) is smaller than a 50c coin. 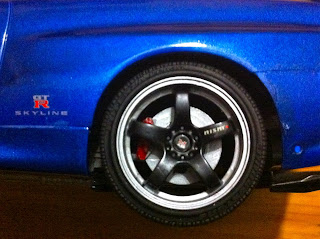 A second picture was required, due to above mentioned pride! 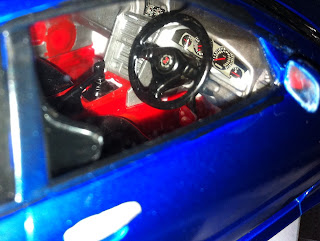 Not sure how well the red interior goes with the rest of the car, but the minute my daughter saw the red paint (that I bought for the rear lights and the brembo brake pads), I knew that no further correspondence would be entered into regarding that decision.
P.S. I did not paint the speedometer, it's a sticker 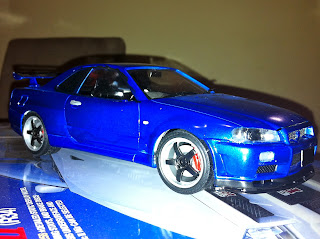 The most important tip I would give any model builder is that, like with sin taxes, when using plastic cement, Less is Better!  Be cautious when using plastic cement after the body had been painted, because it would cause the paint to smudge.  There is also no compulsion for you to follow every instruction (regarding painting) provided in the manual. Try something new and individualise. It is a lot more fun.
I had got the model as something for me to indulge in, but as most parents would know, that is often impossible with young kids. However, this did not turn out so badly. Siddiqa (my soon to be 5 year old daughter) sometimes got involved and it was by no means an intrusion but rather a chance to share a great experience together. I still think that she only did it cos I gave her a chance to use spraypaint! 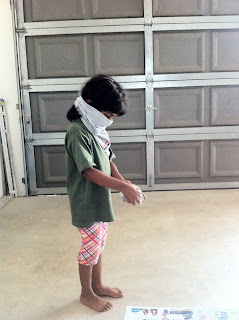 I know many of you are looking at the picture above and thinking, "That's a different interpretation of the Purdah laws", but all I could think about while watching her was "Future Grafitti Artist in the Making!"
Posted by Unknown at 2:04 PM