Today was intense. I had to wake up earlier than normal and leave to Greytown where I was to address field staff on corporate changes that impacted them little. On route, I discovered that the road was closed and the detour added 20 km to my journey. The return journey (via Stanger) was longer than anticipated. I had to during this journey deal with a plumber who was sent to repair my leaking geyser, and a salesman for a solar geyser (which I opted to buy), and the pest control people who were scheduled to fumigate my house today. I then attended a staff safety function and then took my mum out to her favourite restaurant to celebrate her birthday. I am not writing this for sympathy or because I have decided to start blogging about all my mundane daily activities but rather to share with you that during the course of today I also completed a 320 page (4 CD) novel!
The audiobook industry does not pay me royalties, but I am beginning to think more and more, that maybe they should. I understand that audiobooks may not be everybodies cup of tea but I implore you to try it at least once before dismissing the idea. The reward is hours of entertainment and enlightenment to replace the wasted time spent merely driving. Contact me if you would like me to recommend some of the better ones (and if you are an audiobook publisher, contact me if you would like that recommendation to be one of your books :)).In preparation for the journey today, I picked up an audiobook from my library by an unknown (to me at the time) author and a title I had never heard off (Ben Elton, 'Blind Faith'). I thought the book was clever and very funny and used this charm to get you to lower your guard so that much more introspective and thought provoking ideas could be volleyed at you. To ensure that I don't give away too much (and because I am too tired to try and sumarise this book at 1am), I will copy and paste the basic plot from wikipedia. If you intend reading the book, please do not read the wikipedia article as I think it gives away too much. Ironically Ben Elton, the author, turned out to be the co-writer on one of my favourite TV series ever, 'Blackadder'. 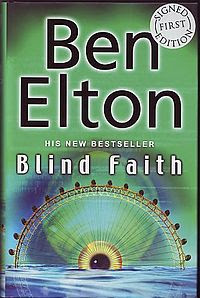 “The story takes place in London approximately 50 years after many parts of the Earth have been subjected to rising water due to global warming. The remaining population believes that "only perverts do things in private", and obsessively blogs and uploads their lives in a sort of voluntary panopticon society( in this context it refers to a society where you are never alone or allowed to keep any secrets and you are continuously under surveillance). A wholesale rejection of science (which is blamed for "The Second Flood") has taken place, and religious faith is compulsory under new "Wembley Laws" (statutes passed by mob assent)”... (source: Wikipedia)
The book is very sexually explicit so perhaps not my pick for an audiobook that may be played in the presence of either children or prudes. Think of an alternative future where the hippies appear as the dominant religious force in the world but treats the populace like the early church treated science. But, I have digressed too long. It is now time to make my point which is simply,
“Why does one have to be either a creationist or an Evolutionist?”
This is a theme that is explored constantly in the book but I suspect Mr Ben Elton loaded the dice in favour of the evolutionists. I am an engineer, thereby an applied scientist. I need to use logic, evidence and reasoning daily to arrive at either a conclusion or a solution. Daily may be an overstatement as we often spend time at meetings where solutions or conclusions are rarely found. But I am also spiritual and believe in a God and believe that the notion that our presence here on earth was a result of successive evolutions stemming from a fluke that occurred 4,5 billion years ago, fantastical.
I have never read the Origin of Species (and neither do I suspect I will, as I imagine it would be rather dull) but I believe in Evolution. I do not believe that we evolved from monkeys but that early man, in all liklihood, looked nothing like we do today. Our present form, dependent on geographical location, is a result of natural selection and evolution. I believe this, and yet still believe that all this is the work of god.
Today, thanks to the power of google and my predisposition to waste time on the internet, I learned that there is actually a term for my belief. I am a 'Theistic Evolutionist'. Hooray, I am not alone. I doubt that this will have any impact on any impending fatwa's but it was comforting to discover that a middle ground existed. Although disclaimers should often be at the start, I like to think, 'better late than never'. It was never my intention to offend anybody and if I had, then I sincerely apologise. If I am to expect tolerance and understanding for my beliefs, in this age of islamophobia, then know that I intend to be tolerant and understanding of all religions and beliefs, even the belief that there is no God.
Posted by Unknown at 4:08 PM