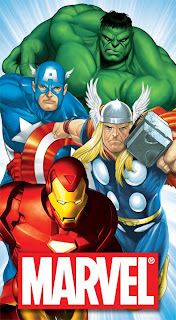 When I write on my profile that "I love all things geek", what I am trying to really say is that I really like cartoons, super-heroes and comics, or as I like to refer to them now that I am on the other side of 30, 'Graphic Novels'. It is therefore, with great anticipation that I am waiting for 2012. I assure you it has nothing to do with John Cusack out-driving Armageddon in a Limo because I really believe that if the Mayans were credible fortune tellers, then they would have somehow foresaw the Spanish Invasion that wiped them out. My wife's argument is that they could have foresaw it but that they merely accepted their fate. 2012 is the year when Marvel combines the pull of Iron Man/ Captain America/ Thor and others to create, The Avengers movie.
There have been little clues as to what was coming in most Marvel movies in the last few years. i.e Nick Fury (Samuel L Jackson) waiting for Iron Man at the end of Iron Man 2, Iron Man meeting with the Hulk in a bar at the end of 'the Hulk' and the introduction of Black Widow (Scarlett Johansson) in Iron Man 2 in a role that was not essential to the plot. So we already have, Iron Man, Hulk, Black Widow and Nick Fury. 2011 see's the introduction of Thor and Captain America to the franchise and I am certain that much bigger cameo roles are to be found in both these movies too.
I am just surprised that marvel has not decided to throw the Fantastic Four and Spiderman (both members of the Avengers) into the fray since the CGI for these characters have already been developed but I suppose too many characters would make too complicated a plot. Joss Whedon, who has been tasked to both direct and do the screenplay has an illustrious career in this genre since he pioneered the whole vampire franchise a whole decade before it erupted with TV hits like Buffy and Angel. In any event there are two reasons I wanted to talk about this. The first being how disappointed I am in the new Avengers cartoon series on Fox Kids. There is no Captain America, Thor or Iron man and the Avengers is being led by Ant-Man. Seriously! This cartoon tries to replicate the team dynamics and vibe of the X-men animated series (that us viewers from South Africa would remember from Saturday Morninig KTV) but fails miserably in its attempt.
The second reason was to share with those of you who may not have seen it yet the teaser trailer for Captain America that aired during halftime at the SuperBowl this year.
Unfortunately, I think Marvel's first Avenger is going to have his work cut out for him at the box office this year. I predict the Super Hero movie of the year will go to DC with their take on the Green Lantern. The movie stars Ryan Reynolds who has already proven himself in this genre (Blade Trinity and Wolverine: Origins) and I expect this movie to be fantastic. Enjoy the trailer.
Posted by Unknown at 3:14 AM