The City of Jerusalem

The city of Jerusalem is well known in modern times for all the wrong reasons. The status of Jerusalem remains one of the core issues in the Israeli- Palestinian conflict and has been the site of much violence and attacks in recent history. It is of extreme religious significance to all three Abrahamic faiths (Islam, Judaism and Christianity) and regardless of the dangers associated with making a pilgrimage to this great city, it is one that should be made.
This trip was our gift to each other (my wife and I) to commemorate our 5th wedding anniversary. It worked out perfectly because on the day of our anniversary, we miraculously overcame delays at the border and detention at a road block to perform our Jummah Salah (Friday prayers) at Masjid ul Aqsa, the third holiest site in the Sunni Islamic faith. The experience remains unforgettable to this day and I doubt anything will extinguish the elation of that occasion.

Masjid ul Aqsa
The mosque was first constructed in 705 AD and after being completely destroyed by two earthquakes, was reconstructed in 1035 and has stood since today. It is believed to have been constructed on the site of the Temple Mount, which is the holiest site in Judaism. The Wailing Wall is actually the western wall of the Al Aqsa compound which is located in Old Jerusalem. The modern city of Jerusalem surrounds the old city which is breathtaking. Walking through the old city, with it's stone cobbled floors and old shops is like walking through a movie set of a time long forgotten (excluding the cameras and lighting equipment). We were lucky to have been in Jerusalem during Easter which meant we came across many Christian pilgrims who retraced the steps of Jesus, in a pilgramage known as "The Stations of the Cross". Being in Jerusalem, at this auspicous time, I found myself contemplating more and more on the similarities that exist between the three Abrahamic faiths rather than the differences. Out of respect, I never took any pictures of people whilst in prayer.
The true beauty of Al Aqsa is not so much in the exterior, but the interior is spellbinding. 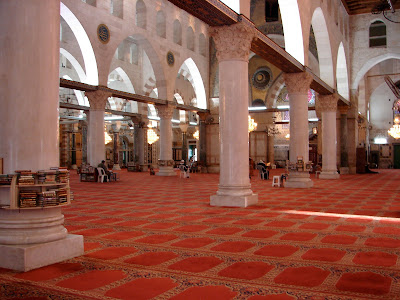 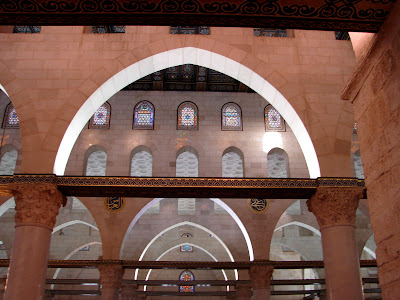 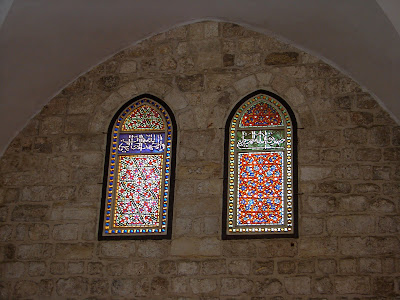 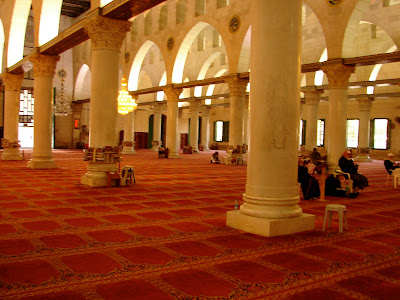 The interior of Al Aqsa is unlike any mosque I have ever visited. The collumns and arches give it character, the glass stains add beauty and the peace that resonates within the confines of those walls are in stark contrast to all the commotion outside it. I may have mentioned Saladin in previous posts and my admiration for him as a leader. Al Aqsa mosque house the pulpit of Saladin.
The pulpit of Saladin was all but destroyed in a fire bomb attack in August 1969, and it's restoration was the topic of a famous documentary, narrated by Kenneth Branagh, called "Stairway to Heaven". What you may not immediately realise from this picture is that the pulpit (the wooden seat displayed in the picture above) is actually a giant puzzle. It is made up of 16 000 pieces of intricately carved wood, adorned with ivory and ebony. After it's destruction, a worldwide search ensued for materials and craftsmen who possessed the necessary skills to re-construct, what is considered by many, the pinnacle of Islamic art.
The Al Aqsa compound also includes the famous "Dome of the Rock" which is so famous in popular culture that it is often mistakenly referred to as Al Aqsa.
The Dome of the Rock is believed by many Muslim scholars to be the site at which the prophet Muhammed acsended to heaven, accompanied by the angel Gabriel. It is a journey known as the Mi'raj. The dome also houses the 'Foundation Stone' which is the holiest site in Judaism. Jews have traditionally regarded the location of the stone as the holiest spot on earth. According to Jewish tradition, it is the site that Abraham prepared to sacrifice his son, Isaac.

Auspicious Christian sites in Jerusalem
I apologize in advance if I make any error in the descriptions that follow. I have obtained most of my information from books and websites on Jerusalem and I am no expert on these sites. Other than the famous, Church of the Holy Sepulchre, venerated as Golgotha, where Jesus was said to have be crucified and then resurrected, there are many other sites in Jerusalem that are auspicious to Christians. Amongst them is the Mount of Olives, which contains at it's foot the Garden of Gethsemane.
According to the book of Acts 1:9-12, Jesus is believed to have ascended to heaven from the Mount of Olives. This led me on a search of another famous site in Jerusalem but there is admittedly no consensus on this claim. There is a church on the outskirts of Old Jerusalem, called the Church of the Ascension. It is believed to have been constructed around the spot where Jesus ascended to Heaven.
My reason for seeking out this church is that there is a basement adjoining the church that  is believed by some to be the final resting place of Rabia Basri. Rabia Basri was a famous female muslim saint and sufi mystic, who is famous for introducing the concept of Divine Love. She is credited for having introduced the concept that God should be loved for God's own sake and not out of fear as was often practiced.
In keeping with the asceticism she practiced in life her tomb is undecorated. She is known for reciting this prayer,
"O God! If I worship You for fear of Hell, burn me in Hell, and if I worship You in hope of Paradise, exclude me from Paradise.
But if I worship You for Your Own sake,
grudge me not Your everlasting Beauty.”
Jerusalem is a city, steeped in history and I urge any person wishing to visit, to read this history from various sources before going. Exploring the old city for famous buildings, sculptures was such an adrenalin rush and it is easy when you are within the walls of Old Jerusalem (yes, the city is walled with it's famous Gates being the only exit into modern day Jerusalem) to forget time and exist in the moment.
Posted by Unknown at 3:53 PM