Welcome to my Domain!

www.knightlynotes.co.za. It has such a better ring to it than www.theinfiniteimprobability.blogspot.com
Today is day 1 of me effectively using my own domain for my blog and it is really exciting. When I started the blog, I did not want to let the selection of the most approriate name delay me from starting, so I registered my account and happened to be reading "And Another Thing", Eoin Colfer's excellent continuation of The Hitchhiker's Guide to the Galaxy (Part 6 of 3), so I decided to go with the name 'The Infinite Improbability Blog'. Being new to such decisions, I never gave much thought to the impact of such a long title or the amount of time that will be wasted by me having to explain the concept of The Infinite Improbability Drive to people.
Shortly after writing a few entries, I visited my cousin to update my cache of movies and TV series and we got to discussing blogs etc. He was way ahead of the curve and must have started blogging about 5 years ago. Funny story: I discovered his blog by accident oneday and knew that I was going to see him at a function that weekend. I read a few of his entries (because they were highly amusing, not for my evil plan) and when we met that weekend, I started chatting about stuff always giving him my views on various things, which were hillariously the mirror images of his own thoughts. This went on for a while until I eventually came clean. Considering that I regard him as the family member that I have the most in common with, he saw the humour in the prank.
He told me how he had started using his own domain now, how cheap it is to set-up, and who to contact to set it up. My mind was made up, but now came the hard part: choosing a domain name. I did not have to wait long because my wife and I went out to lunch that weekend and came up with the name whilst in conversation. It went through many iterations before she suggested Knightly Notes, and I immediately knew that it was the one. We went further and thought thta I could have multiple blogs linked to the website on different topics with catchy titles, e.g. The Parenting Blog would be called "In the Knight Garden" and the Humour Blog would be called, "On a Knighter Note". Realistically, I doubt I would have the time to contribute to so many blogs so I decided to keep everything as is, and just change the domain name.

The thinking behind the domain name is now also much easier to explain i.e. I often only have the time to write late at night and I am a huge fan of Batman i.e. The Dark Knight I also would have an e-mail address that wold be linked to my blog (fayaz@knightlynotes.co.za). In concluding this epic day, I was reminded recently of a great cartoon of the Dark Knight. Hope you enjoy it! 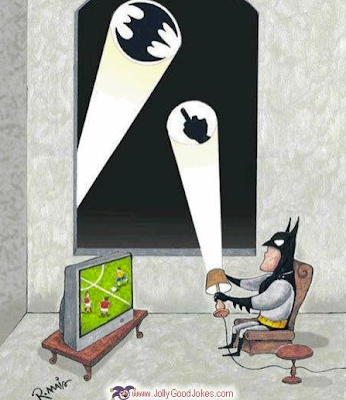