It was reported earlier this week that Iran is prepared to hold talks on its disputed nuclear programme in November. It is disputed because the Western powers “fear” Iran is building capacity to produce a nuclear bomb whereas Iran says that it is pursuing a civilian atomic programme designed to meet it's growing energy needs. Shown below is an estimate of the world's nuclear weapon reserves. 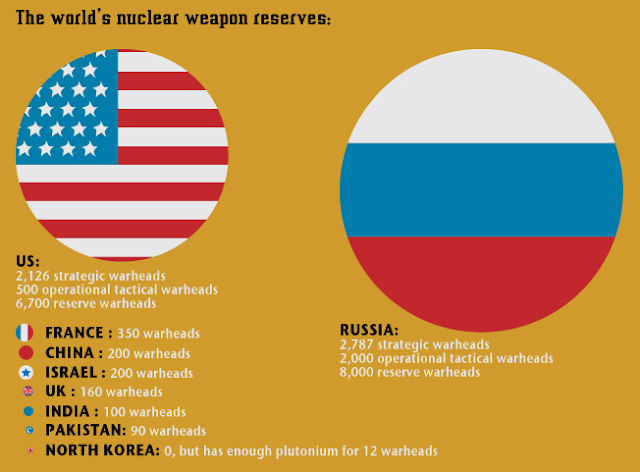 When compared to a map of the region, it is easy to understand why the Iranians have just cause to feel like they are the only ones who brought a knife to a gunfight. They are presently flanked by America on either side (I am referring to the strong presence of US Military in both Iraq and Afghanistan). Israel is rumoured to have as many Nuclear weapons as China (shocking that they are even comparable considering land and population size, if that were ever a justification on the number of nuclear weapons one should possess). And rounding up the nuclear neighbours would be Russia to the north and highly unstable Pakistan to the east. 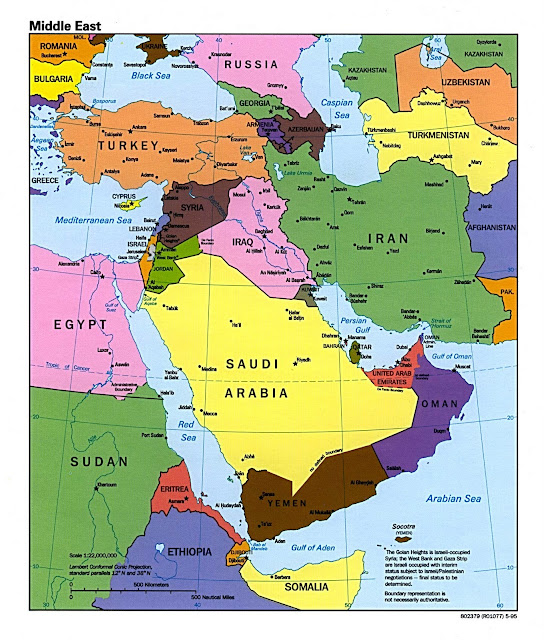 I am not a supporter of Ahmadinejad or his rhetoric, and most definitely not his wardrobe or grooming habits but I feel it is unfair to the people of Iran to have to be subject to sanctions as no evidence has been found to support the 'fear' that Iran intends building a nuclear weapon. Even the Ayatollah Khomeini, who to many is the menacing symbol of militant Shi'ite Islam issued a fatwa, 10 years after the revolution forbidding the development of a nuclear weapon, a stance which has been confirmed even by the contemporary clerics in Iran. Even during the bloody war between Iraq, Iran ,unlike Saddam Hussein, never used chemical weapons. Yet, the world continues to rely on countries that have the largest stockpiles of nuclear weapons to police other nations around the world and enforce the Nuclear Non Proliferation Act.

My point, long winded as it may be, is that Iran be allowed to continue it's civilian atomic program and that sanctions be lifted until such time that there is actual evidence that there are plans in place to construct a nuclear arsenal. If Western nations are really interested in making this world safer, then they should assist Iran, which they are required to do under the Nuclear Non-Proliferation Act, with their civil nuclear program by enriching their uranium for free instead of offering Tehran new fuel swap deals. Oh, they should perhaps also deplete their nuclear weapon stockpiles!

South Africa should take special note, because if we intend increasing our generating capacity by the inclusion of additional nuclear power plants, then it may become financially viable for us to start enriching our own Uranium (SA is ranked fifth in world uranium reserves) rather than exporting our mined uranium resource and then paying a premium for the refined fuel. If we ever decide to do that though, we should be prepared for sanctions and the threat of invasion to help protect the free world!