There is nothing spectacular about Jordan as a country. The capital city of Amaan is modern but nothing life altering. It is not a particularly cheap place to shop, nor did I find the people to be as warm or as welcoming as the neighboring Palestinians. There are however two significant reasons to visit Jordan. The first being, that it shares a 'friendly' border with Israel and is therefore a necessary stop en route to Palestine and secondly to visit one of the "40 places to see before you die", as chosen by the BBC. Petra - "A Rose red city half as old as time"
People of my generation may remember it famously as the location for scenes in Indiana Jones - The Last Crusade. Younger readers (who managed to stay awake long enough) would have seen it recently in Transformers 2 - Revenge of the Fallen. Pictures are worth a thousand words (which means I get to write significantly less in this blog) but they do not begin to compare to the experience of actually visiting this world heritage site.
To enter the city of Petra today, you have to approach from the East. It takes you down an impressive long, sometimes very narrow gorge, known as The Siq (The Shaft). Be warned. This is not a short walk and is considerably more difficult on the return journey, so visitors to Petra are advised to dress for a comfortable hike. Walking down the Siq, one gets the distinct impression that the mountain has majestically parted to allow visitors access to this site. The truth, however, is that the area is prone to flash floods and the walkway was caused due to water erosion.
There are donkeys that may be used to ferry people up and down but I consider this to be an unthinkable mode of transport for all who are able. The reason for this is apparent in the video below of our entry into the city. Who would want to approach a monument such as this, galloping on a donkey!
A quick background to this city. Petra is believed to have been constructed around the 6th century BC and was the capital city of the Nabataeans. This city controlled the commercial routes around the Middle east during the second century BC. Excavations have revealed that it was the ability of the Nabataeans to control the water supply that led to this artificial oasis. They used a combination of dams, cisterns and aquaducts to control regional floods and store water for use throughout the year. Being in control of the regional commercial trade routes at the time, it comes as no surprise that the most famous and elaborate building in Petra is the treasury, "Al Khazneh".
I have to admit that it took some time for me to move from this building. It was not just it's sheer size or beauty that capivated my imagination, but how well it has stood the test of time. Do you think modern structures like the Empire State Building or Big Ben is still going to be around in the year 6000 AD?
You eventually start to explore the rest of the city, and it is only then that you remember that it is a city! I could not find an easy way to depict via photography how vast this city is. It is as if you are walking down a city street and there are buildings on either side of the road, some simple cut outs that lead into caves. Others are more elaborate and signify a greater purpose in city life.
From this point on, regardless of all the Indiana Jones merchandise you saw en route to Petra, all I could think about was the city of Minas Tirith from the Lord of the Rings and to some extent the fortress of Helm's Deep. This could be because I loved the movies or... you be the judge. 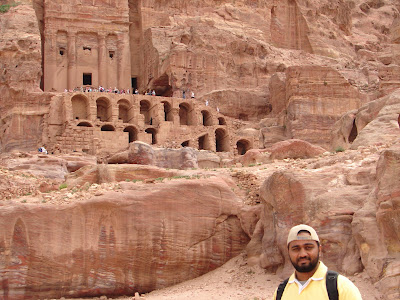 By now, you are possible thinking that I should have wore my cap the right way around becasue there are obvious signs of heat exhaustion. Where is this city? You have only seen pictures, of impressive, yet singular structures. In the next few pictures I will try and show you more of the city but in my defence, I was a bit starstruck and getting the perfect picture was not high on my priority list at the time. You just have to be there, and having the imagination of a 12 year old would help considerably. 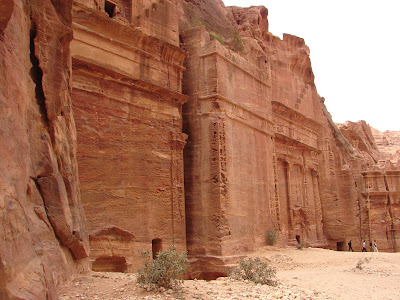 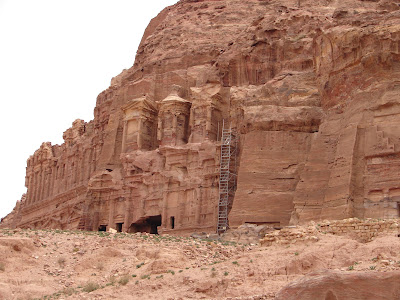 As can be seen in some of these pictures, the site is still under excavation. It was famously revealed that another chamber was discovered below the treasury but I doubt anything of value will be found because looters probably discovered it first. Even the Pyramids at Giza did not impress me as much as the City of Petra and I hope that I have shown you enough to make you want to visit for yourself. Luckily in this tour you can now just close the window. We had to walk back up the long narrow shaft in quite a  hurry to ensure that we did not miss the tour bus!