Paris of the Middle East

As I was going through the pictures of my Middle East trip, I began to realise that there was so much that I had not shared with people. I remember returning form that trip thinking that I need to write a travel book, start a tour company, become a mercenary, anything just to spend more time there. (Dear Reader. For the rest of this blog and any subsequent post on my middle east trip it would be safe to assume that I have found my tourist googles at the bottom of a suitcase and that I am ignoring all the socio political aspects of traveling in the Middle East. Believe me, it is a lot more fun reading about how I eat Baklava from a street vendor in Old Jerusalem than how I was detained without reason at the Israeli border).
Beirut - Paris of the Middle East
If you have to visit just one place in the middle east and have no inclination for this being a spiritual journey, but rather one of countless splendours, then Beirut and Lebanon will be you destination. The food in Beirut is legendary and can best be described as the fusion between French Cuisine and Middle eastern authenticity. Regardless of whether that last phrase made any sense, trust me when I tell you that the food is so good that had Elizabeth Gilbert started her journey of self discovery in Beirut rather than Italy, she would have never got around to any praying or loving! Tragically, the gastronomic experience that stands out for me is that Beirut will forever be remembered as the city where I had my first Burger King Double Whopper. It too was awesome :)
I am not very well travelled but I doubt many sites would compare to the Mediterranean (on a good day). Beirut is a city that is sandwiched between a mountain and the ocean which means that many people get to experience this kind of view from their homes. 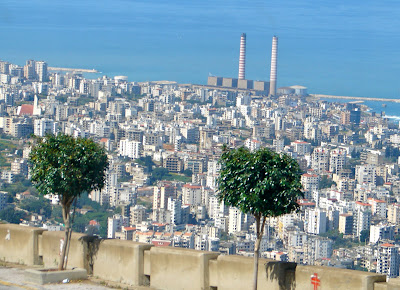 Of course, being an electrical engineer, I was quick to point out to our tour group, the silhoutte of the power station that was famously bombed in the last Israeli-Lebanon conflict. I got comments like "what an eyesore", "Who would put a power station in the middle of the city" etc etc. , but honestly. Look at those towers and tell me you are not thinking, "What an awesome city to host a Red Bull Air Race!".

In any event on this morning, we were told we were going to play in snow. I though they were nuts. Look at this weather. If I told you you will be frolicking in snow in about an hour and a half, would you believe me? Exactly. It therefore came as no surprise when I looked out the bus window and snapped this picture, thinking this may be the most snow I see in one place. 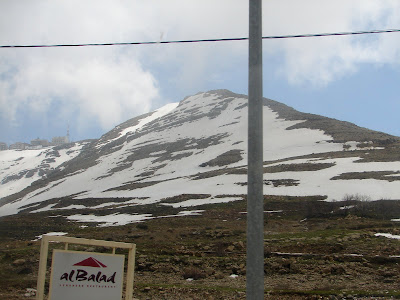 My tune soon changed when I next saw this out the same window! 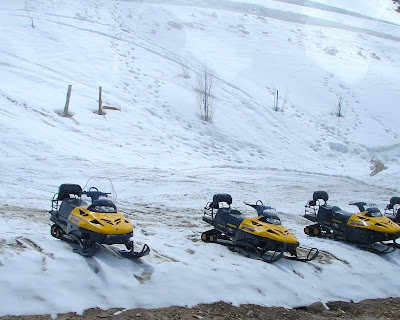 Who goes on a tour to the middle east and expects to go Snow Biking? Seriously! Camel Ride, maybe. Dune karting, hell yeah. But Snow Biking! I can not recall another incident in my life where I was so elated to be proven wrong. But a note to you novices out there who have never been in snow before. Pack your sunglasses. I am not trying to squint like John Cussack in the picture below for artistic effect, it is the reflection of the sun, off the snow (First world problems :))

Our Lady of Lebanon

This statue is not done any justice in any of my pictures so I have taken one of the net. 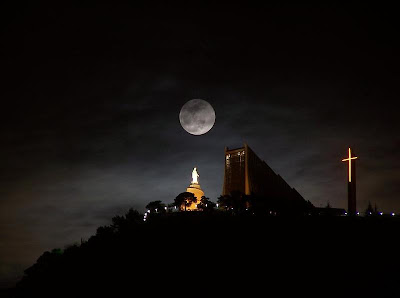 It is a statue of the Virgin Mary that was built by the French in 1907. It stands 20m in height and overlooks one of the most beautiful sights I have ever seen, The Bay of Jounieh. This entire journey to the Middle East started out as a spiritual journey to get closer to Mary, or Mariam as she is referred to in Islamic Texts so to unexpectedly end our journey at a site like this was memorable indeed. The architecture of both the mosques and churches in Lebanon were truly breathtaking.


Jeita Grotto
Actually our journey was to end at the Jeitta Grotto. Our tour guide informed us that it was "like Cango Caves". For those of you unfamiliar with the cango caves it is a moderate cave with stalagmites and stalactites in South Africa but one quite remote so I would not recommend it as an option to most international visitors. Having been to the Cango Caves, I was not excited by this trip and when I saw a placard on a lightpole outside asking us to vote for the Jeita Grotto as one of the "seven wonders of the world", I cannot remember what exactly I said but the majority of the bus found it very amusing. Not having learnt from my experience with the snow, I soon found myself touring one of the most truly breathtaking natural wonders of the world, with egg on my face!

The Jeita Grotto is actually two caves that span 9 km. The upper cave houses the worlds largest stalactite and the lower cave can only be explored by boat since it channels an underground river that provides fresh drinking water to the residents of Beirut. We explored both caves and after an amazing but tiring trek, I finally caught up with our South African tour director. As it turns out, he has never visited the Cango Caves, but has always assumed that it looked the same as this! he was clearly a patriotic optimist so I assured him that the Cango Caves bears as much similarity with this natural wonder as a Ferrari does with Hyundai Getz. Unfortunately, photography is prohibited so I got two pictures from the net.


I spent two days in Lebanon. Imagine what you could do in a week!

P.S. If anybody from Lebanese tourism reads this, please contact me for banking details regarding any tourism commission that may be due. I am willing to forfeit the commission if you do not charge me for using these pictures without permission :)

Email ThisBlogThis!Share to TwitterShare to FacebookShare to Pinterest
Labels: Beirut, Jeita Grotto, Lebanon, Our Lady of Lebanon, Paris of the East