For as long as I can remember I have had a fascination with knives. As best as I can recall it, it started with my grandfather who similarly used to collect knives. He was in a different league though. He had most of the knives in his collection engraved and used to allow me (under strict supervision) to bring them down form his cupboard every now and again. Being his eldest grandchild and without competition his favorite grandson (my sister was his favourite grandchild), he always told me that the collection would be mine one day and that I would have to care for them like he taught me how to ( a fairly uncomplicated task that involved covering them with vaseline and storing them in wax paper). My father gave them away 2 days after my grandfather died while I was away and I thought it would be wholly inappropriate to go reclaim my inheritance (sans legal documentation). I have however held on to a pair of Kitana Blades that he had, and my wife will be ecstatic to hear that I am moving them from our bedroom to be the centrepiece in my new office.
I have previously written on what a huge MacGyver fan I was growing up so I pestered my parents constantly to keep buying me swiss army knives and I would take any opportunity to whip out my Victorinox and save the day. I particularly liked using the screwdriver to open up appliances that generlly stopped functioning after one of my “services” and who could forget those awesome survival knives that used to have a storage compartment in the handle.
Now older (yet surprisingly not much wiser), I am preoccupied with the idea of buying myself a very nice set of Kitchen Knives. One of my best friends, who also happens to be one of my favourite cooks, had convinced me of this investment many times over and I have made the illogical conclusion (generally associated with passion purchases) that her knives and superb knife skills was what contributed greatly to the awesomeness of her food. I had decided that when the time came for me to make this investment , I would buy a Wusthof 18 cm Cook's knife (which I am told is used for 90% of your tasks). The two primary things holding me back from the purchase was the price vs how often I really cook and my inability to sharpen the blade. Enter Anthony Bourdain! 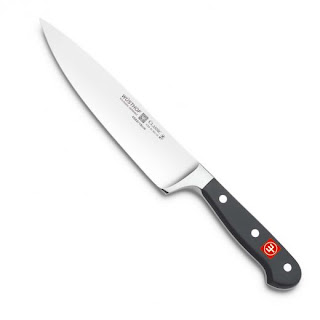 The Wusthof 18cm Cook's Knife
Some would call “Kitchen Confidenial” an autobiography and others 'a guide into the fascinatingly hidden world of a modern restaurant kitchen'. Irrespective, it is a great read that is peppered with tidbits of knowledge that the reader could use to improve his cooking skills or at the very least, his future menu choices. He argues that as an amateur chef, do you really need a knife ( like a Wusthof or Henkel) that is so heavy, so expensive, so difficult to maintain? He recommends rather the lightweigth, easy to sharpen and relatively inexpensive vanadium steel Global Knife from Japan, which in addition to all of the above, looks cool. I was sold. Relatively inexpensive and easy to sharpen! This was what I had been looking for.
You would be surprised to discover that, as it stands, I still dream of oneday owning a Wusthof. The price of Global knives have, after the glowing recommendation by Anthony Bourdain and other New York chefs, increased to the point that presently in South Africa, a Wusthof knife is about R100 ($13) cheaper than the equivalent Global knife. I am happy to continue using the non-branded chef's knife I have for now. It is heavy enough with a complete piece of steel from tip to handle that feels great in my hand. I have decided to invest in a knife sharpener though and since I dont have the time or patience to acquire the skill of sharpening knives with a sharpeneing steel, I have opted to buy the Scanpan 3 stage blade sharpener which seems simple enough to use. 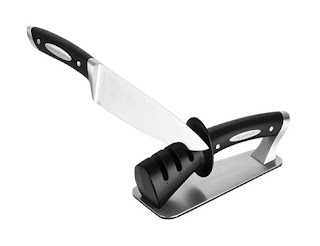 Fun fact: a bit of unrelated information related to cooking that I was thrilled to discover recently. Whislt doing a roast chicken on the Weber, my sister who was reading a recipe book asked me why the symbol for pounds was lbs? I had never contemplated that and immediately whipped out my phone to google the answer. It turns out that pound is short for pound weight which translated in latin is Libra Pondo. The Latin usage was shortened to libra, which naturally was abbreviated 'lb'. We adopted the pound part from pondo, yet kept the abbreviation for libra.
Posted by Unknown at 6:55 PM