Bloemfontein - Where childhood lives on


(N.B. I have no intention of making this a travel blog. It is purely co-incidental that I started the blog yesterday and travelled to Bloemfontein today)
For someone who is such a strong advocate of taking the time to fully appreciate the beauty of South Africa before going on international holiday, it is surprising that this is my first visit to Bloemfontein but having re-read the above sentence it comes as no surprise at all. A visit to Bloemfontein does not conjure up feelings of excitement or anticipation, a point proven by the fact that whenever I told someone of my planned trip, the first response was always, “Why?”.
I was already prejudiced against this city and knew before I had even arrived there that it was not an experience I was going to enjoy and I was going to return of stories of how closely it resembled the american midwest of the 1950's. I must admit when I am wrong for it was almost 2 whole hours before I saw my first farmer with a comb sticking out of his socks. This is not intended to be racist, but I just don't get it. Is it meant to be a fashion statement? Does it symbolise political affiliation? Do Khaki shorts not have pockets? Little did I realise that the arrival of “he whose hair shall never be out of place” was only a precursor of things to come.
Let me set the scene. I am an hour outside of Bloemfontein on a Friday morning, waiting at the shell garage to meet a contractor before proceeding to site. Suddenly traffic police arrive and begin making preparations to stop traffic. The police are followed by a convey of teachers, parents and kids with homemade boxcarts. There were 6 boys and 3 boxcarts. Amid much fanfare (by smalltown Free state standards), the boys line up there carts on a quickly constructed starting line (Think Fast and the Furious). After all the parents had taken their pictures (I took one as well in the event that people don't believe this actually happened), the race begun and the boys ran down the road at a tremendous pace often coming very close to crashing into each other. I expected the boys who were pushing to eventually jump on to the cart, but they never did. They just ran and pushed their pilot all the way to the end. Jokes aside, it was great to see kids being kids again. I'm sure that this is the kind of neighbourhood where there is a kite season, and a marble season etc. Never though I would get nostalgic after a visit to Petrusburg! 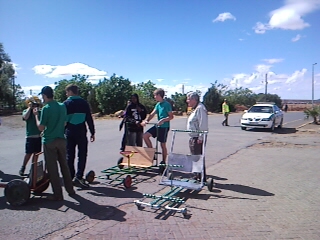 There were nice aspects to Bloemfontein. The waterfront (stop sniggering, if Randburg can have one, then why can't Bloem), is not one of them. The dead fish floating on the surface of the man made lake is a definite turn off and made me really regret having lunch at Ocean Basket. The airport was lovely though. It was cosy much in the same way you would expect a country B&B to be. There were never any lines, you did not feel pressured when getting all your belongings and laptop through the scanner, the staff were all friendly and courteous. The small Illy coffee stall after you check in also make one of the nicest espresso's I have ever tasted. I often consider it sacrilegious to have an espresso from a paper cup but I made an exception in this instance and was pleasantly rewarded.
P.S. I sat behind Andrew Hudson on the flight to Bloemfontein. I could have got his signature, but  honestly, what would be the point!
Posted by Unknown at 3:50 PM