Why Apple does not support Flash (and why I support Apple)?

My latest article on Bandwidth Blog discussed the fallacy that using an iPad does not expose you to the "Full web" as due to Apple not supporting Flash on iOS, you would be unable to view over 70% of the video content on the web. I agree that Apple try and direct most things via the iTunes store and although I wish it were otherwise, one has to accept that they are a business and this is what makes them money. However, the support of flash, in my opinion, has little to  with iTunes as we are primarily talking about content on the internet.
My BandwidthBlog article

Among techies, the debate around Apple or Android is very similar to the choice between Liverpool and Manchester United. You have to be in one camp, or the other. To be fair there is a Chelsea in this debate (the Blackberry Playbook). I personally do not have that hangup. I have complete faith in the guys at Google but wonder whether the hardware mated to Android tablets will not ultimately be it's downfall. I Love my iPad, as I do all my Apple products and it has nothing to do with the marketing because in South Africa we are not exposed to the ads with Giselle Bundchen, like the one below
OK, I agree that was a low blow and completely unrelated to the topic, as that had to do with comparisons between PC and Mac but it was funny, right?
The first Apple product I got was a Macbook Pro. I admittedly paid a massive premium for it, compared to a similarly spec'ed Windows laptop but it was a "passion purchase". I had always wanted one (due significantly to it's presence in popular culture) and the fact that Douglas Adams swore by all things Apple, so when I could afford one, I bought it. It has now been two years and I still do not regret the decision. So when it came time for me to choose a new phone on my contract, I chose the iPhone 4. This did not come at a cost premium because it was similar in price to most of the other smartphones on the market but I was already impressed with the company. It should be noted that I  am very brand loyal. 12 years ago I bought my first Honda and I have only bought Honda's ever since. Incidently, I still own the Ballade I bought 12 years ago. I similarly love my iPhone 4 but am certain that the Android smartphones today have the same apps and functionality as the iPhone. It all boils down to choice and personal preference.
When the iPad was launched I did not see the point or need for a tablet. It would really be just a toy, a nice to have, but me being me, I had to have! I found ways to justify and rationalise the purchase, but for me there was no choice other than the iPad. The pricing was  good. I already had apps on my iPhone that would work on the iPad, and as stated above, I had faith that Apple will deliver a good product. When I bought my iPad there was no choice in that segment. There was no segment! People either loved the iPad or predicted it's inevitable doom as such a device 'makes no logical sense'. 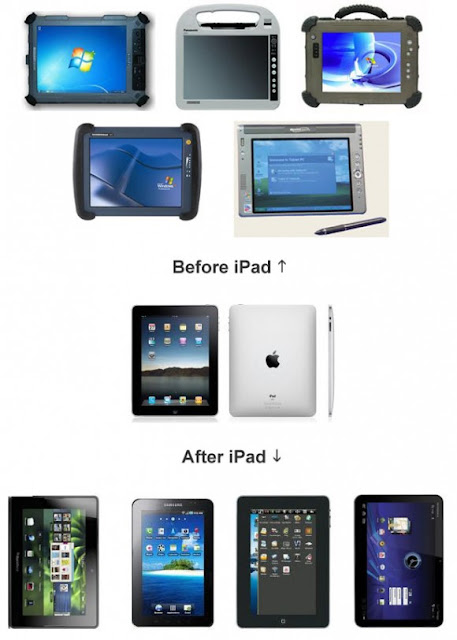 Today, there are many options to chose from and once again, it remains a matter of personal taste and preference i.e. if you have an Android smartphone, then you may want to take advantage of the compatibility between two devices running the same operating system and the same argument could be made for either the Playbook or the iPad.
In truth, the real reason I bought the iPad 2 had nothing to do with brand loyalty, or apps already purchased or Stephen Fry's article in Time. It was this commercial!
Posted by Unknown at 5:24 PM