The latest trailer for the upcoming Harry Potter movie

Now that X-men has come and gone, this is the movie event that I am most looking forward to. The conclusion to an amzing cinematic experience that took us from a little boy still trying to find himself in a strange new world and concludes, as those of you who read the book know with... don't worry. No spoilers ahead. However (ha ha fooled those of you still reading), I think it should be borne in mind that most of the events in this final movie happen over a single day. That is the either the recipe for non-stop action or a pace too quick for proper appreciation. I am hoping for the former.
In my opinion, this movie, which I though was titled "The Battle of Hogwarts", will undoubtedly be compared by all geeks to the legendary Battle of Helms Deep (Lord of the Rings: the Two Towers). In my personal opinion, nothing would ever compare to that battle. I still get goose bumps when I see Gandalf lead the riders of Rohan down into battle, still laugh when Gimly asks Aragon not to tell the elf that he had to be tossed onto the bridge. Needless to say, I am biased. I am confident however that this movie will do justice to the battle ( I should henceforth be known as, "He whose expectations are easily raised" ). The movie comes out in July and I am thinking of watching them all again over the next couple of weeks. My favourite thus far has been "The Goblet of Fire".
P.S. If you have never yet experience Harry Potter as an audiobook read by Stephen Fry then you are missing out on what I believe to be the best possible way of enjoying this tale. But then again, that may be my bias again :) 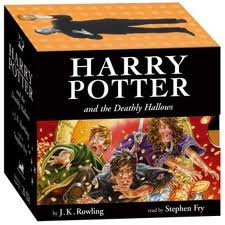