I wrote an article for Durban Live on the upcoming Time of the Writer festival and it may be viewed in edited form here
Durban Live Article: Time of the Writer
Readers of my blog should however have the opportunity to view my article in it's unedited form. The editor removed references that were not related to the event itself and shortened it. She unfortunately removed all the funny bits in the process but it is her duty as editor to keep the content consistent with the site and I acknowledge that.
My article in it's unedited (funnier and slightly longer form) 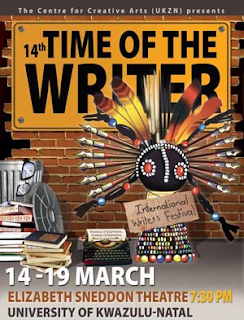 
For many, March brings with it the much awaited and very publicised Top Gear Festival which is to be held outdoors at the Kyalami Grand Prix Circuit. It promises, as it does every year, a once in a lifetime motoring experience but allow me the opportunity to save some Durbanites the hassle and inconvenience of a trip to Gauteng, only to have Jeremy Clarkson confirm that the best car in any competition would be the British one or at the very least, one that was designed by a Brit. My advice, stay in Durban, because from March 14th to 19th the South African literary world, together with other intellectual giants from around the world, will gather in our backyard for the 14th Annual Time of the Writer festival.
The Centre for Creative Arts (University of KwaZulu Natal) have over the last few years transformed this event into not just a literary event, but one that celebrates our very freedom of expression, which ironically is the theme of this years festival. With 21 prominent writers from 12 different countries on the programme discussing their books, the creative process and the context in which they write, this years festival promises a literary dialogue and debate that would be both captivating and insightful.
An evening programme will be hosted nightly at the Elizabeth Sneddon Theatre throughout the festival and this will begin with a book launch and some live music which will be followed by a double-bill reading and subsequent panel discussion. Amongst the themes to be discussed at this years festival is “Writing Resistance” and “The Pen as a Weapon Against War”. These evening functions are complemented by daily workshops covering topics ranging from 'what it takes to create successful online journals and communities' to a 2 hour 'creative writing workshop' at the BAT Centre on Saturday the 19th of March.
“Opening Night” on the 14th March 2011 promises to be the highlight of this years festival with the keynote address to be given by recently retired constitutional court judge and lifelong activist, Justice Albie Sachs. The address is titled “Free Spirit and Ravaged Souls – tension at the heart of freedom of expression”. Fresh from the success of receiving the 2010 Alan Paton literary award for his book “The Strange Alchemy of Life and Law” and as one of the architects of our constitution, his opinions on where we now find ourselves as a nation, dealing with freedom of expression, will be much anticipated.
My advice to Durbanites. Feed your mind this March at the Time of the Writer Festival. Then travel up to Johannesburg the following weekend (27 March 2010) and feed your soul at the Kings of Leon Concert.
For a full programme and details visit
Time of the writer website
Posted by Unknown at 3:18 PM